Home/With regret, the pilot was killed…

With regret, the pilot was killed…

This following has been taken directly from the BBC website.

If you follow the link at the end of this post you can visit to see the video and hear some eye-witness commentary.

An RAF Red Arrows pilot died when his plane crashed following a display at the Bournemouth Air Festival in Dorset.

Eyewitnesses described seeing the plane plunge to the ground in a field near the River Stour at Throop village.

It was one of nine Red Arrows aircraft that had earlier taken part in a display over the seafront.

Shaun Spencer-Perkins, who witnessed the crash from Throop Mill, said: “I heard a rushing sound and I saw a plane about 15m above the ground racing across the fields.

“Members of the public jumped into the water to search for the cockpit.

“We waved down the helicopter, I took off my son’s orange jacket and my wife’s red jumper to get the attention of the helicopter.”

He said the plane had crashed about 100m from where he and his family were walking near the River Stour and debris was spread across a large area.

Another eyewitness, Nicholas Gore, 22, from Throop, was walking with a friend near the river when saw all nine Red Arrows go over.

“There were quite a few people watching and we saw them go over but one seemed quite low,” he said.

“They then disappeared behind trees and I heard a crack – not an explosion – just a crack and we got further down and I saw the plane with its red tail in the air and its nose in the river.

Mark Grogan was playing a round of golf at the nearby Parley Golf Centre, where he works, at the time of the crash.

He said: “I heard a sound like a car backfiring. Within five minutes the helicopters arrived, there were at least five helicopters including the police and two from the coastguard.

“One of the local farmers said they’d seen rescue teams pulling the pilot out of the river.”

BBC South Today producer Martin Webster, who was at the scene, said he saw only eight of the nine Red Arrows RAF display team’s aircraft land on the runway following the display at the annual event.

Darren Blakeman, who was watching the display, described what he saw: “We watched nine Red Arrows take off, then they did an approach from the south of the runway, they did a little display.

“After that display only eight of the airplanes landed and then there was a big siren went off at the airport, like an emergency sound, and there was a big yellow fire truck parked in the viewing area and then that rushed off with its blue lights going.”

A statement on its website confirmed that the airport was closed “for a short time but is now back to normal operations”. 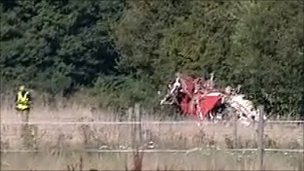 The plane plunged into a field near the River Stour

“Passengers due to fly out of the airport this… evening are asked to check in as normal.”

Organisers of the Bournemouth Air Festival said events were continuing as scheduled.

A Ministry of Defence spokesman said they were investigating the incident.

The crash site remains cordoned off by police and only people living inside the zone are being allowed access.

The Military Air Accident Investigation Branch were also admitted through the cordon to start work on identifying the cause of the crash.

Both cockpit seats are fitted with Martin-Baker Mark 10B rocket boosted ejection seats.