“There’s been a murder TriniCSI!" 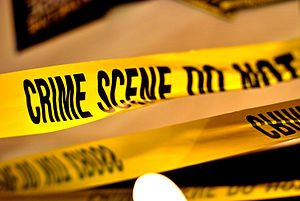 Picture the scene, a lady looking up from reading her book where she sees the suspect, leaning over the corpse, dead, with his neck ripped open as if some kind of beast has attacked.

The suspect makes no moves to neither escape nor shy away, the defence is simple, “I found him like this”.

Is it really as clear cut as it should be?

This is another interesting day in Trinidad for the TriniCSI…

The scene was cordoned off with crime scene tape and the suspect was arrested and placed in confinement until the guilt could be proved.

“OK what are we looking at here?” said the SIO (Senior Investigating Officer).

Male dark complexion, very hairy has what appears to be his throat ripped out [Aren’t you glad I didn’t get the pictures for you?]. Suspect stood over the body but protests her innocence.

A canvas is called to look for eye witnesses, a lady by the name of Ellie stands out from the crow, “Yes I say her looking over the body”, she says, pointing to the young lady as she is led away..

As it turns out as with a lot of eye witnesses, during interview Miss Ellie didn’t see quite as much as she thought, and the murder is unsolved.

Crime scene investigators are called in to search the suspect (who is a crime scene), the body (another scene), the area the body was found (a crime scene) and an area near the body where it looks like the incident may have occurred. What draws that conclusion? The ground is messed up, indentations on the grass and what appears to be body parts scattered around. This is one messy murder.

OK the victim is dead. No need for a doctor to tell us that but we should check to be sure. Doctor Tatty please come and see, enter the scene this way please in your nice crime scene suit. Contamination… Don’t bring anything into the scene or take anything out…

“What’s your details please Doc?” asks the copper on the cordon. Hey? Yes everyone is logged in and out so we can keep command and control, time is also logged, in and out.

OK the doc is out and he is dead. Take him away, the Crime Scene Investigators (CSI’s) bag him up and ensure the bag is secured against cross contamination in a new bag and with security seals.

OK get him out of here…

Right after all of that what have we got?

One suspect, one eye witness, one body and not a lot else…

Suddenly Doris the copper is startled when the suspect started to be sick.

Wait, what’s that coming out? More bits of the body? Oh Bubbles, we will have to clean you up too now…

The suspect is Bubbles the Dog and the victim in this case is Sammy, the squirrel from the trees in our garden, but it just goes to show how easy it can be to apply basic crime scene principles into an investigation to aid you.