Home/Soldiers to be told they’re discharged while still deployed

Soldiers to be told they’re discharged while still deployed 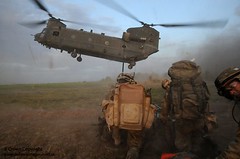 “Soldiers to be told they’re discharged while still deployed”

Soldiers could be put forward for discharge from the Army while serving on the frontline in Afghanistan.

Some serving soldiers are likely to have to leave under the manning control points programme, the Ministry of Defence said.

An MoD spokeswoman said MCP was aimed at ensuring the right balance of skills in certain trades and experience.

She said: “The Army is close to being fully manned for the first time in some years. To ensure that there is the right balance of soldiers for current operations, a small number could be required to leave under the manning control points.”

Those chosen to go could be identified while serving on the frontline, but it is understood that the process of discharging them would not start until they had returned to Britain.