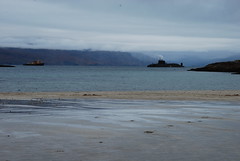 The £1 billion HMS Astute — designed to be virtually “invisible” to enemies —has become a tourist attraction on the Isle of Skye. Residents said the 97 metre-long nuclear-powered submarine, the length of 10 London double-decker buses, was stuck on rocks near Skye Bridge.

A spokesman for the Ministry of Defence said the boat was watertight and there was no nuclear risk but admitted it was in difficulties.

Helen Birch of the International Otter Survival Fund at Broadford on Skye said: “I didn’t expect to see a submarine out of our window. It was quite a surprise. I expect it will become a bit of a tourist attraction while it’s stuck here.”

The MoD spokesman said: “We are aware of an incident involving one of our submarines off the Isle of Skye. This is not a nuclear incident.

“We are responding and can confirm that there are no injuries to personnel and the submarine remains watertight. There is no indication of any environmental impact.”

The 7,800-tonne Astute is the Royal Navy’s newest and largest attack submarine and her naming ceremony was conducted by the Duchess of Cornwall, who is patron of the boat.

The Maritime and Coastguard Agency said it was alerted at about 0819. A spokesman said they were monitoring the situation.

Astute is one of three fleet submarines built at a cost of £3.5 billion and boasts a radical new autopilot.

Speaking to the BBC last month, Astute’s commanding officer, Commander Andy Coles, said: “We have a brand new method of controlling the submarine, which is by platform management system, rather than the old conventional way of doing everything of using your hands.

“This is all fly-by-wire technology including only an autopilot rather than a steering column.” Her nuclear reactor does not need to be refuelled during the boat’s 25-year service. Since the submarine can purify water and air, she can circumnavigate the planet without resurfacing.

She is the first submarine built in the UK since HMS Vengeance in 1998.

On November 20 2009, Astute arrived at her home port at Faslane and on 16 February she left there for sea trials and dived for the first time two days later.

It is not the first incident involving a nuclear submarine off Scotland. In 2001, HMS Triumph was grounded off the Scottish coast while under the command of trainee officers — fortunately, she suffered only superficial damage.

The Royal Navy said Triumph made “a glancing contact with soft sand and shells” when submerged.

Submarine HMS Trafalgar also sustained millions of pounds of damage when she ran aground off Skye in 2002. Two senior officers were reprimanded over the incident after admitting negligence.

* Launched on June 8, 2007, she can make drinking water and oxygen from sea water so she can circumnavigate the planet without resurfacing.

* Her 96m hull is coated with 39,000 rubber tiles which make her virtually impossible for an enemy to hear

* She makes less noise than a baby dolphin and has silent flush lavatories.

* Astute’s listening systems are so sophisticated she can detect the QE2 leaving New York from the Channel.

* She can carry 38 Spearfish heavyweight torpedoes and Tomahawk land attack cruise missiles, which can pinpoint targets in North Africa from Portsmouth.