Home/Remembrance Day: Where they fell

Remembrance Day: Where they fell

British forces incurred casualites throughout Britain’s involvement in
Palestine which stretched from its mandate granted in 1922 by the League of
Nations through to the declaration of Israel’s independence in 1948. This period
was punctuated by unrest and violence, sometimes directed at British forces. The
bloodiest period was the run-up to Israel’s independence when Zionist
underground forces targetted British presence.

Lasting from 1948 until 1960, the Malayan emergency was a period of unrest
following the creation of the Federation of Malaya after World War II. British
forces were used to suppress the uprising led by rebels of the largely Chinese
Communist Party of Malaya. Its policy of relocating rural Chinese into “New
villages” proved especially unpopular. Later, after addressing political
grievances, the uprising petered out.

On 20 April 1949, HMS Amethyst was steaming up the Yangtze River during the
Chinese civil war when it came under attack from the People’s Liberation Army.
The PLA was advancing on Shanghai at the time. The frigate grounded but in such
a way that it couldn’t bring its guns to bear on its attackers. The vessel took
dozens of direct hits and its crew was forced to abandon ship.

Britain responded to the United Nations’ call to send military assistance to
the Republic of Korea following an invasion across the 38th parallel by the
North Korean Peoples’ Army. After initial battlefield successes, the North
Koreans were beaten back by a multi-national force to the area of the 38th
parallel despite assistance from China. Some 100,000 British men and women
served in the region during the conflict.

Britain’s post-war presence in Egypt was increasingly unpopular. Anti-British
demonstrations were followed by guerrilla warfare against Britain’s garrison in
the canal zone. British reprisals led to the burning of Cairo in 1952. The
unrest lasted three years. British troops left in 1955.

In 1950, the Mau Mau, an African nationalist movement, was banned by British
authorities. Two years later, following growing unrest and a campaign of
sabotage and assassination, the British Kenya government declared a state of
emergency and began four years of military operations against the rebels.
Thousands of rebels were killed but ultimately the uprising led to Kenya’s
independence.

Having withdrawn from Egypt, Cyprus became Britain’s new location for its
Middle East HQ. A campaign to gain independence for Cyprus and unite the island
with Greece was launched against the British presence which had begun in 1923 in
the aftermath of World War I. 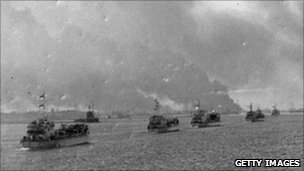 Having colluded with Israel to attack Egypt to provide an excuse for
intervening, Britain, allied with France, mounted a military campaign to seize
control of the Suez canal after Egypt’s ruler, President Nasser, nationalised
the key waterway. The combined forces soon defeated the Egyptians but the
venture sparked a major international crisis and Britain, France and Israel were
all forced to remove their troops.

Opposition to the oppressive rule by the Sultan of Oman led to the emergence
of a rebellion in the Dhofar region. British forces trained and advised the
Sultan’s military in combatting the uprising which recieved help from China and
the Soviet Union. The rebellion was finally crushed in 1975 through a
combination of Jordanian and Iranian troops, British equipment and personnel
with financial backing from Saudi Arabia and UAE.

British forces were involved in what amounted to an undeclared war between
Indonesdia and Malaysia, the latter backed by the British government. Indonesian
nationalists, keen to see the unification of the island’s territories, backed
rebels who launched raids along the border between Indonesia and
Malaya-controlled Borneo. 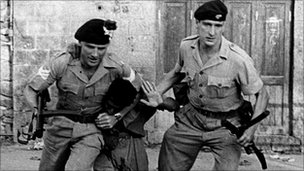 The name for the insurgency against British rule that was mounted by two
rival nationalists groups vying for control of the country following Britain’s
promised departure. British forces withdrew abruptly at the end of the conflict,
paving the way for the creation of Southern Yemen, now merged with the north to
form modern-day Yemen.

Tensions between the Catholic and Protestant communities spilled over into
violence, prompting the government to order troops onto the streets of Northern
Ireland in 1969. Direct rule was imposed in 1972 as the violence escalated.
Paramilitary groups became increasingly deadly and the violence spread to
mainland Britain. More than 3,600 people, most of them civilans, died.

Wranglings between the UK and Argentina over the islands began in the 19th
century and rumbled on into the 20th century. After months of sabre-rattling,
Argentina’s military rulers ordered troops to invade on 2 April 1982. Britain
dispatched a military force to eject them. The Argentine garrison commander in
Port Stanley surrendered on 14 June. The fighting cost the lives of 655
Argentine and 255 British servicemen. Diplomatic relations in were restored in
1990, but Argentina maintains its claim to the islands it calls Las
Malvinas.

Iraq invaded the oil-rich state of Kuwait in August 1990, prompting what
became known as the first Gulf War. US-led coalition forces were sent to the
region and in January 1991 launched Operation Desert Storm – a sustained aerial
bombardment involving cruise missiles launched from US warships and US, British
and Saudi Arabian fighter planes, bombers and helicopters. Four days after the
Allied land offensive began on 24 February, US President George Bush declared
victory. Kuwait was liberated but Saddam Hussein remained in power.

British forces were deployed to the former Yugoslavia as part of the United
Nations peace force. As bitter civil war engulfed much of Bosnia, British troops
were caught in the crossfire keeping the sides apart. Later, as the war spread
to Kosovo, British forces suffered casualties both during and after Nato’s air
campaign which forced Serb troops out of the Albanian majority province. 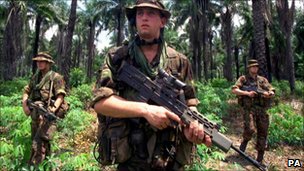 British troops launched a rescue mission in September 2000 after renegade
militia group the West Side Boys threatened to kill six British soldiers being
held hostage in a remote jungle stronghold. Some 12 soldiers were injured in the
mission and one was killed. About 1,000 British troops had initially been sent
to Sierra Leone to help with the evacuation of foreign nationals. But they went
on to provide logistical support to the beleaguered UN operation, and training
for government forces.

Following the 11 September 2001 attacks on the US, the UK joined US-led
forces in the so-called “War on terror” – with al-Qaeda in Afghanistan as the
principal target. The Royal Navy and RAF launched missile strikes against the
Taleban and al-Qaeda bases in October. Royal Marine commandos were sent in a
month later. Since the fall of the Taleban, the UK has played a major role as
part of the International Security Assistance Force (ISAF) to establish and
maintain security and train Afghan forces.

US and British forces launched their “shock and awe” bombardment of Baghdad
in March 2003 as coalition ground forces moved in to topple Saddam Hussein’s
regime. Iraqi forces resisted until 9 April. Saddam fled but was later captured,
tried and hanged. After the war, British troops were mainly based in the
southern city of Basra to maintain security and help train the new Iraqi forces.
The UK’s combat role in Iraq was declared complete in April 2009 and combat
troops withdrew. Some UK forces remain in Iraq to help with military
training.