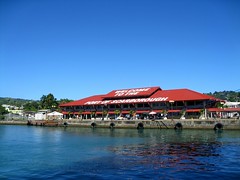 The body of a man, with feet and hands bound, was found in the sea at Plymouth, Tobago, around midday yesterday. Police suspect foul play and are treating the incident as a homicide. (Well he could have tied his own hands and feet then jumped into the sea to kill himself??? Or an I being silly now??? LMFAO).

According to police reports the body appears to be that of a young male. His hands were tied behind his back and there were marks of violence about the body, including what appeared to be bullet wounds. (And of course shot himself too… Still only suspect foul play???).

The body was viewed by District Medical Officer Dr Mentor Melville (and his wife, pet dog Alf and Alf’s 13 puppies who published pictures in the newspapers), who ordered that the body be removed to the Scarborough Hospital mortuary. An autopsy is to be performed to determine the exact cause of death.

Officers of the Scarborough CID are continuing investigations.

This is diabolical reporting. Im sure it was filed by John aged 5!

Sorry the link to this article is here