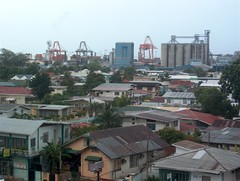 Now this must be the writing on the wall for those that believe their own organisation is staying to fight crime. The following article is from the Trinidad Express. It says a new Police unit has been set up to tackle the gangs, well lets hope for one it tackles the whole problem not just the deaths of gang members.

WITH criminal gangs in Port of Spain becoming increasingly uncontrollable, engaging in shootouts with each other and injuring innocent bystanders in the process, the Police Service has formed a special unit designed to tackle gangs in all forms.

The unit, which the Express understands is called the “CCTV Response Unit”, consists of approximately 100 police officers pulled from various sections and specially trained units and will carry out 24-hour patrols and response services in known crime hotspots.

The unit, which is based at the former Repeat Offenders Task Force (ROPTF) office upstairs the Besson Street Police Station, is expected to be officially launched later this week.

Among the senior officers at the unit, which was formed by acting Deputy Commissioner Anti-Crime Operations Raymond Craig and ACP Harold Phillip, are acting ASPs Sahadeo Singh, of the Besson Street CID, Kenny Mc Intyre, along with Alleyne of the GEB, Walcott of the IATF, Sgts Brandon John of the Belmont CID and Kester Billy of the POSTF.

Commissioner of Police Dwayne Gibbs, questioned in a telephone interview over the weekend about the unit, said he did not wish to speak about the initiatives his officers intend to embark upon. Describing the recent activities involving gangs in East Port of Spain as “very tragic”, Gibbs said he was certain that with the new measures being implemented the police will be successful.

He said, “I won’t talk about any kind of tactics that the police are engaged in, but certainly the crime that is taking place, the murders that are taking place, are very tragic and something that is of concern, and I can assure you and Trinidad and Tobago that we are doing everything we can to suppress these types of events from taking place.”

Questioned about the decision to remove the mobile police units from Mango Rose, East Dry River and Block Eight, John John, Laventille, Gibbs said, “We have looked at our policing efforts and we are taking stock of what needs to be done and I can assure the public that our policing efforts haven’t diminished, but have increased and will continue to increase in order to help fight this terrible scourge of crime that we are facing.”

Security concerns have been raised by several residents after the two units were removed last week. Hours after the removal of the units, there was a significant increase in gang-related shootings in both communities. Port of Spain Mayor Louis Lee Sing said the withdrawal of posts has led to an escalation in criminal activities and called for the units to be returned.

Up to press time, 43 homicides had been recorded for the year thus far, 15 of which occurred in the Besson Street policing district. Of the 15 killings, 12 occurred in East Port of Spain and all involved the use of illegal firearms.