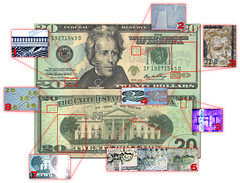 Handwriting can be as distinct as Fingerprints. A handwriting analyst with forensic training can determine, by comparing a document with samples of the same and different handwriting, if it is real or a forgery.

A more comprehensive definition would read: forensic handwriting analysis is about comparing two or more documents and determining within a reasonable degree of certainty whether the same person or whether different people wrote them.

Handwriting can be Almost as Distinct as Fingerprints

Even in the age of laptop computers and electronic money transfers, most people have to write at some time or other. It is said that a person’s handwriting is as distinct at their fingerprints – ok, maybe a little harder to establish, but a good forensic handwriting analyst should be able to compare and two or more match samples of handwriting that the same person wrote.

Everybody has read the articles that tell people that if their handwriting is really small, they are subconsciously trying to hide from the world or they are insecure; or that if they write the initial letters of their first or last name much bigger than the other letters, they like attention. Well, this kind of analysis is usually done by a graphologist, which forensic scientists insist have nothing to do with actual scientific forensic handwriting analysis.

However, in the United Kingdom and other regions outside the USA, the term, Graphology is regarded as part of Handwriting Analysis, so keep that in mind.

What is Forensic Handwriting Analysis?

Forensic handwriting analysis has helped send people to jail since the days of the Lindbergh baby kidnapping. Many famous cases have centred on handwriting evidence and forensic document examination.

Acceptability in Court in the USA

For a long time forensic handwriting analysis seemed respectable in US courtrooms, but its status has been shaky since 1993, when the Supreme Court handed down its ruling in Daubert v. Merrell Dow Pharmaceuticals.

Previously the chief criterion for the admissibility of expert testimony had been whether it was, based on techniques “generally accepted” by scientists.

Often, when crime scene investigators (CSIs) come across a document that is part of a crime scene, it is taken to a forensic handwriting analyst or forgery expert who must determine if the handwriting is consistent with the person who is suspected of writing it or maybe if the writing is a forgery.

In other words, a forensic handwriting analysis expert decides whether two or more samples were written by the same person, e.g., whether a signature was forged.

It is not only handwritten documents that the forensic scientist looks at. Typed and printed documents can be forged and altered as well. When the scientist looks at the questioned document and look for giveaway signs of the printer or forge that made it. Much like shoes and tyres a printer will have minute defects that can be identified by scientists and these will link the documents to the printer/forge which in turn identifies the person using it

Handwriting Samples and the Fifth Amendment

In the USA, the Fifth Amendment states that every person has the right not to incriminate him/herself. It has been established that it is not a violation of a person’s rights to provide a requested sample of their writing for comparison purposes. Therefore, the court can order a suspect to provide a handwriting standard even if he is reluctant.

Because handwriting analysis cannot be scientifically measured, the results of a handwriting comparisons are still not always accepted as evidence in a court case.

To date there is nothing yet like AFIS, but in its Questioned Documents Division, the US Government maintains a database of handwriting samples. The National Fraudulent Check File, Bank Robbery Note File, and the Anonymous Letter File are all operated by the Federal Bureau of Investigation (FBI). These databases contain reference files to which forensic handwriting analysts can compare some questionable documents.