Home/Don't laugh, this is serious……

Don't laugh, this is serious……

There have been many times when I have laughed and joked at the scene of a terrible crime. Not out of disrespect or because I had any feelings about the victim(s) or suspect(s) but because I, like you, am human.

There are many people who don’t understand that but when you are faced with the worst of society you need to find a way to deal with it. Most people, especially if you are in the Military or the Police (all emergency services) will use humour as a defence mechanism.

I defy anyone to go into scene after scene after scene and not be affected by them. I also defy anyone to keep all humour locked up while you are working these terrible scenes. Its the type of people we are, that can laugh and joke, while still carrying out a very professional job that enable these cases to be solved. Its our way of dealing with it, and yes the officers should do it away from the press and others (especially the family(s)), but they need to get what they are dealing with out of their systems.

I remember dealing with a body where rigour mortis had set in. The guy I was working with could not carry on for a good ten minutes through laughter when I tried to put the body in a body bag and the rigour snapped. I nearly flew through the roof the noise was like a bone breaking! he laughed so mu it took a long time for us to calm down again.

That in no way meant we were unprofessional. nor did it mean we didn’t respect the victim or appreciate the seriousness of the scene we were dealing with, but it meant we were human.

I would like to see the full reports of all the defence and prosecution and finally the judges reasoning as to the acquittals but the actions of this crime scene team are not all bad.

The two unidentified Italian CSI investigators are seen in the official video shown to the court during the appeal in Perugia of Amanda Knox and Raffaele Sollecito.

One of the men is heard to say: ‘I could really do with some cocaine to give me a kick.’ 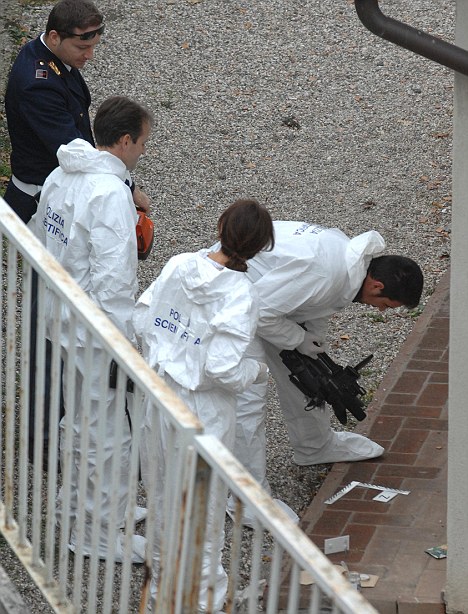 Investigation: Forensic police – not the officers filmed on the official video – outside the house in Perugia where student Meredith Kercher was found murdered

His colleague replies: ‘Don’t you mean crack?’ Both then laugh loudly while examining the blood-splattered room.

In other parts of the film they seem to be confused over which equipment to use to examine the scene and one then reveals how a product known as Luminol which shows up blood invisible to the naked eye has been left in Rome. 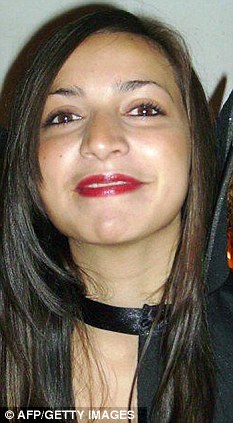 The revelations will bring fresh heartache for the Kercher family who after last week’s dramatic acquittal of Knox, 24, and 27-year-old Sollecito are left wondering just who killed their daughter.

She was found semi naked and with her throat cut at the house she shared with American student Knox.

During the appeal, the court heard from two forensic professors who were appointed by judge Claudio Pratillo Hellman to look into the way the investigation was handled and they produced a damning report.

Professors Carla Vecchiotti and Stefano Conti said they had counted more than 50 errors police made as they examined the murder scene and their report was vital to the acquittal of Knox and Sollecito.

Key to the original conviction in December 2009 had been a 30cm kitchen knife recovered at Sollecito’s apartment and on which was found DNA from Meredith on the blade and that of Knox on the handle.

However the court was told by the experts the amount from Meredith was so low it should not be used as evidence because it could not even be retested – although the DNA on the handle was confirmed as Knox’s.

Sollecito was convicted because his DNA was found on a clasp from Meredith’s bloodied bra but the experts revealed that it was collected six weeks after the murder making the possibility of contamination highly possible. 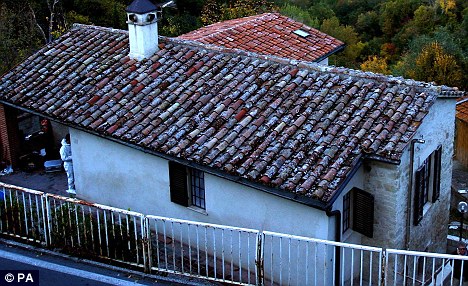 Murder scene: The house which Meredith Kercher shared with Amanda Knox. The police forensic team made 50 blunders searching the property

The experts also pointed out how simple breaches of protocol when gathering evidence had been made including using dirty gloves, not covering hair and not changing shoe covers as well as putting items in plastic bags instead of paper ones.

This coupled with the ‘jovial unprofessional manner’ of the forensic team opened up serious questions over the reliability of the police investigation – although they insist all standards and regulations were followed.

Today no-one was available to comment on the joke made by the officers at the forensic unit HQ in Rome, but Patrizia Stefanoni who led the probe repeatedly told the court the investigation had followed procedures and criticism was unfounded. 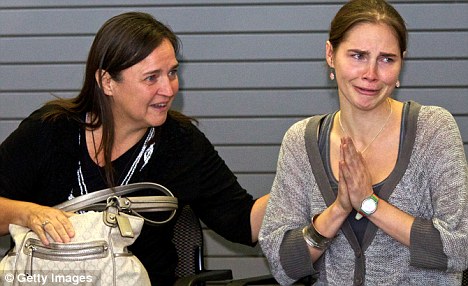 Freedom: Amanda Knox acknowledges the cheers of supporters while her mother Edda Mellas comforts her when they returned home to Seattle

Luciano Garofalo, a former commander of Italy’s leading forensic investigation unit with the carabinieri paramilitary police said:”You have to remember that these scenes of crime probes last hours and hours – we are not robots, we are humans.

“The work of the scientific unit has been criminalised over the last few weeks, they were just having a laugh and letting off steam.

‘I would like to put anyone in that situation and see how they cope, see if they don’t make a joke.

“The finds were reliable and at the end of the day its only these two so- called experts who have this theory which has not been double checked.

‘Are they experienced enough ? Are they up to the standards of the forensic police? ‘ 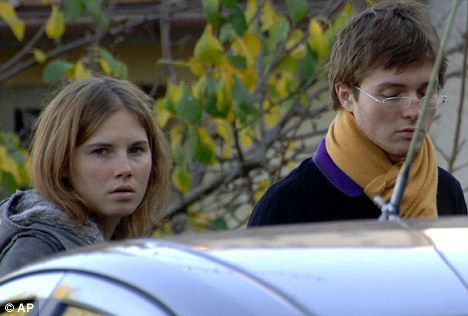 Acquitted: Amanda Knox and her then boyfriend Raffaele Sollecito outside the home she shared with Meredith Kercher

Last night neither of Knox’s lawyers Carlo Dalla Vedova and Luciano Ghirga were available, but a member of the defence team said: ‘This is why we asked for an independent report. We were just not happy with the methods used.’

Meanwhile, it has also emerged that Knox intends to sue Italian police for wrongful arrest and imprisonment – but she will have to wait a year until the Supreme Court in Rome makes a final judgment on the case.

They are will rule late next year on whether the appeal should be upheld or overturned and the trial reopened.

Meredith, from Coulsdon, was in Perugia as part of her Leeds University European Studies degree and had only been in Italy for two months before she was murdered.

Knox and Sollecito were convicted sentenced to 26 and 25 years respectively. A third defendant, Ivorian drifter Rudy Hermann Guede, 24, was also convicted and had his 16-year prison sentence upheld by Italy’s highest court.

Following Monday’s acquittals, Guede’s lawyer has said he wants the case reopened, given Italy’s high court ruled that he did not act alone.