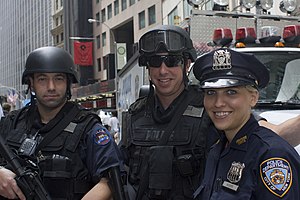 I have just read the report below and the end few lines got me thinking?

If you implement new technology solutions does it mean fewer jobs?

This report says it does but I would also be interested to hear your thoughts?

I am a firm believer that new technology can be used to capture criminals and stop atrocities taking place so it must be adopted by the Police and Intelligence services as soon as practicable. But we also need the people to run that technology and also the people to carry out both the routine administration and the physical capture work of the police.

What do you think? Let me know in the comments, good and bad will be published.

The NYPD is armed with a portable gizmo that allows cops to immediately confirm identities at crime scenes with the roll of a thumb.

Police hope the technology – used primarily by the crime scene unit and warrant division – will help speed up investigations by quickly generating names.

They first tested the mobile fingerprint devices about three years ago, using just a few of the gadgets.

In recent weeks, the Police Department added about two dozen more. And they may not be done shopping.

“We’re going to assess the technology and see whether or not we’re going to add more,” said Deputy Inspector Kim Royster, an NYPD spokesman.

Cops using the handheld devices have to ask a person’s permission before taking their prints.

The prints are then run through an electronic statewide database. If there’s a match, police can quickly determine a person’s identity and check for outstanding warrants.

Law enforcement experts say the devices help cut through nonsense on the street when suspects try to stall cops by using a seemingly endless string of aliases.

But not everyone is convinced.

If the NYPD’s use of the devices becomes more widespread, the city may run into a challenge by civil libertarians.

“But I worry they will make it far too easy for the police to take and keep fingerprints and photos of law-abiding people.”

“If there’s no hit, the fingerprint is erased,” Royster said. “It is not kept on file.”

They not only identify people; they also allow cops to take pictures of potential suspects they can use to show to crime victims.

And they can be used to identify the dead at homicide and accident scenes.

Under Commissioner Ray Kelly, the Police Department has become increasingly dependent on technology, a move that has helped it offset a decrease in the size of the force.