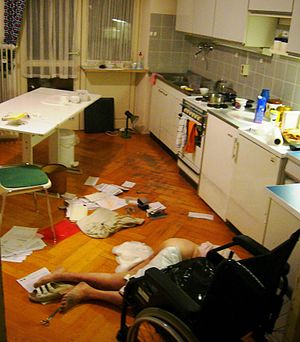 An introduction to Crime Scene Photography

Crime scene photography can also be called forensic photography and has been around almost as long as the camera itself. Its purpose is to record evidence that will be admissible in court.

Criminologists quickly realized that such technology could freeze time — creating a supposedly incontestable record of a crime scene, a piece of evidence or a body. The 19th century French photographer Alphonse Bertillon was the first to approach a crime scene with the systematic methods of an investigator. He’d capture images at various distances and take both ground level and overhead shots.

Today, forensic photographs are essential for investigating and prosecuting a crime. This is because most evidence is transitory (it can and will move): Fingerprints must be lifted; bodies must be taken away and examined; and homes or businesses must be returned to their normal state. Photographs help preserve not only the most fleeting evi­dence — like the shape of a blood stain that will soon be mopped up — but als­o the placement of items in a room and the relation of evidence to other objects. Such images can prove vital to investigators long after the crime scene is gone.

Crime scene photographers must be methodical in their work. They can’t afford to leave out an important piece of evidence or produce photographs that could be considered misleading in court. But they also have the press­ure of the entire operation behind them.

Before other CSIs can touch or move any of the evidence and even before the medical examiner can remove the body, the forensic photographer must document the scene.

There are three classifications of forensic photos — overviews, mid-range and close-ups.

If the crime took place inside, overviews include photos of the outside of the building, its entrances and exits as well as images that place the building in relation to its surroundings. Photos of spectators at the scene can later help locate witnesses or suspects. Overviews also include images of all rooms, taken from overhead and from each corner.

The forensic photographer then hones in on key pieces of evidence and captures images of them in the context. These mid-range photos might picture a piece of evidence, like a knife, but at enough of a distance to show its relation to furniture, a blood stain or the rest of the room. Mid-range images establish the distance of object from surrounding objects.

Finally, the photographer thoroughly documents evidence with close-up images. Close-ups include identifying marks like scars on a corpse or serial numbers on a bloodied piece of electronic equipment. A photographer will often include a ruler (known as a photographic scale) in the shot to establish scale but always takes a duplicate image without the measuring device. In court, the defence could claim the device covered something important.

And of course, pictures are of no value unless they’re in context. A forensic photographer keeps a photo log that includes every relevant detail, the photo number, any filters applied, the time and date and the location and a description of the object. The advent of digital photography has helped to make some aspects of recording the time and date simpler and more verifiable.

Early detectives used to sketch the scene of a crime. Photography introduced a way to produce images that were more true-to-life and credible than drawings. And while an honest and technically sound photograph can record the ori­ginal state of a crime scene, it’s simple enough to manipulate a photograph or record an image that’s drastically different from reality.

A good photograph of a crime scene must meet certain technical specifications: correct exposure, sharp focus and maximum depth of field, the portion of the photograph that appears sharp. The image must also be free from distortion. Such technical standards produce photos that will actually aid agents in their investigation of a crime.

But there are additional qualities that make a photo admissible in court. The image pictured cannot alter the scene or evidence — say through strategic blocking with a measuring device or an intentionally shallow depth of field. The image must also be relevant to the case and should be composed with technical precision in mind, not emotional appeal. Only one crime scene should be recorded on the camera at any one time (unless in an emergency).

Photographers might vary their kit based on personal preferences or the type of crime scene but most carry certain basics: a camera, maybe even multiple cameras; filters; electronic flashes; various lenses for wide-angle, mid-range and close-up shots; a tripod; a measuring device; a grey card, which when combined with a light meter helps produce correctly exposed photographs; and a way to protect equipment from rain or extreme heat or cold.

Crime scene photographers usually use colour images although black and white can be useful when documenting evidence that relies more on texture than colour like latent fingerprints.

All types of crime scene should be photographed. Including images of injuries and damage caused by police on raids, bodies and marks and scrapings left on surfaces or in the soil. The list is endless but a descent CSI will be able to identify the extent of their scene and any further scenes resulting from their photographic examination.