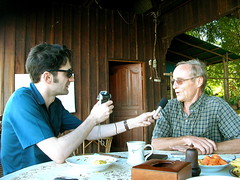 Locard studied medicine and law at Lyon, eventually becoming the assistant of Alexandre Lacassagne, a criminologist and professor. He held this post until 1910, when he began the foundation of his criminal laboratory.

He produced a monumental, seven-volume work, Traité de Criminalistique, and in 1918, developed 12 matching points for fingerprint identification. He continued with his research until his death in 1966.

In 1910 Locard succeeded in persuading the Lyons Police Department to give him two attic rooms and two assistants, to start what became the first police laboratory. He was a pioneer.

The young Georges Simenon, later to become a well-known detective writer, is known to have attended some Locard lectures in 1919 or 1920.

Locard’s Exchange Principle states that with contact between two items, there will always be an exchange. This is the basis of trace evidence collection at a crime scene.

No matter how much someone tries to clean up a crime scene, something is generally left behind. It may not always be detected, or even be visible to the human eye, but it’s almost impossible to take any kind of action, let alone a violent one, without shedding something. This principle, called Locard’s Exchange Principle, has become one of the motivating factors in the development of forensic science around the world.

Although trace evidence on its own is often not enough to make a case, it can corroborate other evidence or eyewitness, or even prompt a confession which could help to solve the case.

What is Locard’s Exchange Principle?

Trace evidence is based on Locard’s Exchange Principle which contends that every contact, no matter how slight, will leave a trace. The trace is normally caused by objects or substances contacting one another, and leaving a minute sample on the contact surfaces. There is also secondary transfer.

Primary and Secondary Transfers of Fibres.

There are many ways that fibres can be transferred in the commission of a crime. They can transfer from a fabric source like a carpet, bed, or furniture at a crime scene. This is called direct or primary transfer of forensic fibres.

A secondary transfer occurs when already transferred fibres on the clothing of a suspect transfer to the clothing of a victim. For instance, if fibres from a carpet in the suspect’s bedroom get transferred to the victim, without the victim ever having been in that bedroom. Understanding the mechanics of primary and secondary transfer is important when reconstructing the events of a crime.

The main point is that some apparently foreign object or piece of material has been brought to a crime scene and tracing its origin can assist in an arrest and conviction. Similarly, finding some trace from the victim or crime scene on a suspect can also have a strong impact on a case.

Edmond Locard was the director of the very first crime laboratory in existence, located in Lyon, France. Locard’s techniques proved useful to the French Secret Service during World War I (1914–1918), when he was able to determine where soldiers and prisoners had died by examining the stains on their uniforms.

The Locard’s Exchange Principle, also known as Locard’s Theory simply says that every contact leaves a trace. In his own words: “Physical evidence cannot be wrong, it cannot perjure itself, it cannot be wholly absent. Only human failure to find it, study and understand it, can diminish its value.”

Collection of Trace Evidence from a Crime Scene

Trace evidence is any type of material left at – or taken from – a crime scene, or the result of contact between two surfaces, like shoes and the carpet, or fibres from where someone sat on a sofa.

After a crime has been committed the crime scene must be carefully preserved so that the police or the people first on the crime scene don’t contaminate it, because they also leave trace evidence. They need to keep any contact with the crime scene to a minimum.

Once the crime scene is sealed, the trace evidence needs to be collected. Each item is put into a sterilized container (contrary to popular belief, plastic bag are almost never used – actually a paper bag or envelope is used which will prevent further decomposition). This is labelled for later analysis at the laboratory.

Examples of typical trace evidence in criminal cases include:

For such trace evidence to be useful, it must be compared to similar items from suspects, but particular care is necessary to ensure a thorough analysis.

“Wherever he steps, wherever he touches, whatever he leaves, even without consciousness, will serve as a silent witness against him. Not only his fingerprints or his footprints, but his hair, the fibres from his clothes, the glass he breaks, the tool mark he leaves, the paint he scratches, the blood or semen he deposits or collects. All of these and more, bear mute witness against him. This is evidence that does not forget. It is not confused by the excitement of the moment. It is not absent because human witnesses are. It is factual evidence. Physical evidence cannot be wrong, it cannot perjure itself, it cannot be wholly absent. Only human failure to find it, study and understand it, can diminish its value.” – Paul L. Kirk. 1953. Crime investigation: physical evidence and the police laboratory. Interscience Publishers, Inc.: New York.