The closure of the forensic science archive in England and Wales will cause miscarriages of justice and stop police solving crimes, senior politicians, scientists and lawyers have warned.

The archive has been closed to save money, meaning forces will have to create individual storage systems.

The Home Office said proper access to forensic records would be maintained.

The Archive of the Forensic Science Service (FSS) holds more than 1.7m case files – some more than 30-years-old.

The records are regularly used to investigate unsolved crimes, as well as for appeals against unsafe convictions. 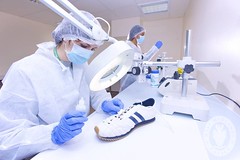 But in March, the government closed the FSS from taking on more material, arguing that it had been losing money.

Now, each of the 43 police forces across England and Wales must arrange its own storage of future forensic records.

Responding to the move, the Association of Chief Police Officers said: “The closure of the FSS has encompassed issues related to the archive.

“The FSS has worked very closely with Acpo, criminal case review commission, Crown Prosecution Service and the Ministry of Justice to ensure that continuity of service, security and probity of the archive remain paramount.”

Yet the decision has drawn criticism from experts and campaigners.

Alastair Logan – a member of the Law Society’s Human Rights Committee who helped overturn the convictions of the Guilford Four, who were wrongly imprisoned for an IRA bombing in the 1970s – said the closure was an act of vandalism by the government.

“They have destroyed a very valuable resource. They have put nothing in it’s place and miscarriages of justice will occur,” he warned.

Speaking to the BBC, Mr Logan also said the move would create a two archive “lottery” – one old and centralised, the other new and fragmented.

“You now have 43 forces keeping their own bits and pieces, in so far as they decide to keep them at all,” he said.

“If a perpetrator of a rape, rapes in London and then Manchester, how will it be possible for the London people to know about the Manchester offence?”

Andrew Miller MP, chair of the science and technology select committee, also hit out against the change.

He said: “I genuinely fear for justice – both in terms of victims and the accused”.

Mr Miller said the closure was “a shallow decision, poorly thought out,” and driven by a short-term policy to save money.

“It really is just another Home Office shambles.”

He also underlined the potential set-back to scientific advances: “Unless we get this right, the chances of exploiting new advances in science will be diminished and so justice will be the loser.”

But a Home Office spokesman said: “The police and criminal justice system continue to have proper access to forensic records to enable them to protect the public and bring criminals to justice.

“The archive is under the guardianship of the Home Office and provides materials on request to authorised users,” he said.

“The costs are kept under review to ensure value for money for the taxpayer and we will consider the longer term approach to protecting archive materials with criminal justice partners.”

However, BBC News has learned that no new funding or facilities have been made available to police forces to set up and maintain future storage.

Instead, it will be up to individual forces to arrange for a contract with a private provider, or to store it themselves.

The old FSS archive is expected to receive £2m a year to sustain its operation and 21 members of staff.

But Dr Peter Bull, an expert in forensic sedimentology from the University of Oxford, said the measures would be totally inadequate.

“That’s ludicrous – that’s two sites. They’ve got to be like Fort Knox. Two million pounds a year won’t pay for the paint to keep the walls clean.”

Dr Bull also warned the new archive system could lead to major miscarriages of justice, with innocent people being kept behind bars and some criminals remaining at liberty.

“The one in prison will see his sentence out, the one who could have been detected will go scot-free,” he said.